In an effort to learn about a few concepts relevant to Tableau Server and automation, we're going to build the following: a Python script that uses Tableau Server's REST API, webhooks and a library called HTTPServer, to post to Slack. The resulting application is based on the premise of posting a notification to Slack when a new workbook is published to Tableau Server. The notification message should contain a link to the workbook, as well as its thumbnail. Like this: 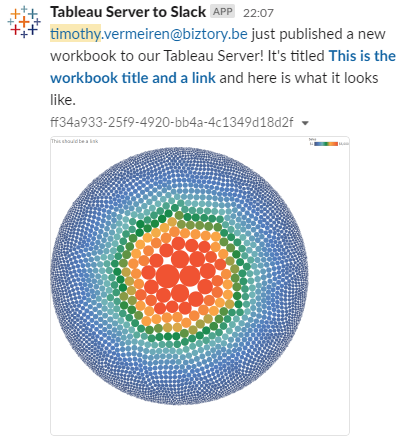 The project is as good as completed. There are improvements to work on, but the concepts and functionality are all there and available on GitHub. We'll refer to that repository from time to time.

There are a few aspects of this project that do require some preparation. The bulk of that is related to the authentication to the two platforms we're working with: Tableau Server and Slack.

For Tableau Server, we'll be using Personal Access Tokens, which are currently the preferred way of authenticating to the Tableau Server REST API, and are easy to set up.

As for Slack, we've set up an app that uses a bot token to authenticate. Slack app authentication is slightly more complicated, so if these concepts are new to you, it's a good idea to read up and then set up the app and grab the token.

Aside from authentication, it's worth checking the usage section of the documentation to set up the Python virtual environment and the further pre-requisites.

Enough about introductions and preparations; on to the actual substance. Our Python script will be the glue between the different components mentioned in the introduction. Remember, a webhook is a mechanism we can use to call a service or function when a specific event occurs on Tableau Server. It works by sending an HTTP request with information about the event at hand, to a certain URL.

Our script will set up and connect the webhook(s) using the REST API, and ensure the webhook can talk back to us. To do all this, we'll use the following Python modules:

These components are spun together as follows:

A Few Highlights In The Code

We're not going to cover the full script in this blog post, but a few sections are worth a closer look.

The above makes use of a convenient module called configparser, which provides easy access to a configuration file's contents. Point to the file, and this will ensure you can readily access the configuration values in a Python list.

It's not yet thoroughly documented, but the Tableau Server Client already supports actions for managing webhooks on Tableau Server! It's really quite simple to pass the three required parameters we need, and have it set up.

Other Comments About The Code

If you're interested, it's worth skimming through the code to see what it does. The most interesting remaining part may be the definition and setup of the do_POST(self) function as part of the SimpleHTTPRequestHandler class. Basically: what do we do when we receive a message from the Tableau Server webhook! The HTTPServer will just keep listening forever when launched, and will execute this code when "spoken to".

The code is slightly too extensive to include in the blog post, but it comes down to:

The timing of this post and the work in it, is rather interestingly timed. Indeed, at their global virtual Tableau Conference, Tableau did just announce they would soon start supporting... Slack notifications from Tableau Server. What a coincidence.

So, was this all in vain? Most certainly not! Here are a few reasons why:

In conclusion, we're very happy with what we've learned from building this educational script. If you're working on similar projects or if you can use some help with a similar initiative, don't hesitate to be inspired by this example, or to reach out. #DataDevs, here to support each other!