How I used collapsible sheets to build a virtual escape room with Tableau!

Chapter I - The idea

I love playing escape rooms; solving problems is something my mind revels in. And I am not too bad at it, if my friends are to be believed. They once watched and listened to a whole room I was playing in, and their feedback at the end was: “If you stopped listening to Tarek, who is absolutely clueless, and paid a bit more attention to what Jérémy was saying, you’d probably have been out 10 minutes ago”. It was more meant as a dig to my friend than an actual praise of my skills, but I’ll take it anyway.

This episode happened in Vilnius, Lithuania, during one of my friends’ yearly ‘blind destination trips’. How does that work? After realising how difficult it was to have 8 grown-ups agree on anything, we decided that two of us would plan everything and the other 6 will just happily show up with what they’ve been asked to bring. Each year, we’ll change the pair of organizers and enjoy another “zero-planning” trip. The most fun is the destination being kept secret until the very last moment; usually revealed when the organisers stop in front of a gate at the airport.

Early 2020 - when I didn’t have to hide my moustache behind a mask in public - it was my turn to plan something. We quickly settled on the concept: a short ski trip to nearby France. But keeping the destination a surprise while telling everyone to pack their ski boots wasn’t going to cut it. We didn’t want to tell everyone: “We’re going to ski, yeah!” either. So, as we remembered that escape room moment, we decided to have them work their way through a set of enigmas and private jokes to find out the destination. After realising how bad both of us were at setting up a small website to do so, I decided to give it a go with Tableau.

The dashboard would be published on Tableau Public and would consist of a single screen with an enigma to resolve and a text box to provide answers. Answering correctly would bring up another enigma on the same screen, until the final enigma is resolved and the final destination revealed.

From a Tableau perspective, this answer box would simply be a string parameter, set up as “Type in”. 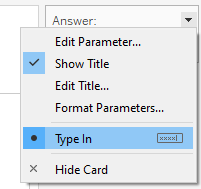 Each enigma will have its own worksheet, where the enigma will be displayed. The main feature is to dynamically show only the current enigma/worksheet while hiding the other ones.
To achieve such a feat, I used a technique called “collapsible sheets”.

Here is how to set it up: first, let’s place all the enigma worksheets within one vertical container. Make sure to have them fit the entire view, hide titles, do not fix their height nor “Distribute Evenly” within the container (see left hand-side of the picture below). From there, if a worksheet is filtered in a way that no records can be returned, it will be empty and will therefore collapse, letting other sheets within the container occupy more space (see right hand-side of the picture below).

All we have to do is to put a filter in place so that all sheets bar one would always collapse. In my case, I am using a calculated field to assess whether the answer provided - the parameter value - matches the answer for the previous enigma, meaning that the solution has been found and the next question should be revealed.

By the way, don’t try to make sense of the enigma descriptions in the above image; this is just some random text from hipsum.co, a dummy text generator that provides “hipster” words rather than the eternal lorem ipsum. And yes, there is one for cat lovers too.

The most difficult part isn’t to come up with enigmas, but to actually anticipate answers and most importantly, mistakes. Here are a few things to bear in mind.

First of all: we are using a text parameter as a way to check whether an answer is valid; which means one typo or a different case might not be recognized as correct. We need to treat the answers provided with extra care:

The second thing to remember is that an answer to an enigma will show the next enigma; but technically, someone could by mistake provide the final answer while trying to answer the first question and bypass the whole game. There isn’t a mechanism to check whether intermediate answers have been provided (even though it could be done with parameter actions, but that would be another blog post).

The last thing to foresee is a help page for any unforeseeable incorrect answers. You’ll want to avoid having all sheets collapsing at the same time when the answer provided does not resemble anything that you might have anticipated, leaving the player with an empty screen without instructions.

Now that we have the basic mechanism, the fun really starts. You can use your imagination along with the full extent of your Tableau knowledge to build enigmas. Using text or shapes will work nicely to frame any enigma, but here are a few ideas to spice things up:

The one thing that was missing from my game, and I couldn’t build in Tableau, was the ability to record the time spent trying to solve the game. Here is how I achieved this:

At the end of the day, as I kept thinking about new features to be added to the game, I realised how versatile Tableau can be. I don’t think I’ll design a virtual Escape Room game for one of our clients anytime soon, but this challenged me and forced me to use several Tableau “hacks” that will be very helpful in the future, collapsible sheets being one of them.

Oh, I guess you want to play now? The original game is full of private jokes, so it wouldn’t make sense for you to play it. But I’ve put together a very light version if you’d like to have a go. Can you crack the code?